L-CAN’s mission includes ensuring that a low-carbohydrate dietary pattern be included as one option in the U.S. Dietary Guidelines for Americans.

Our current nutritional guidelines are all high‑carbohydrate.

More than 50% of calories as carbohydrates is not an appropriate diet for the majority of Americans with pre-diabetes or Type 2 diabetes, for the 2/3 of Americans who are obese or overweight, or for the 88% of Americans who take medication for some kind of diet-related disease. These people need a low-carb option.

Macronutrients listed as a percentage of total calories. 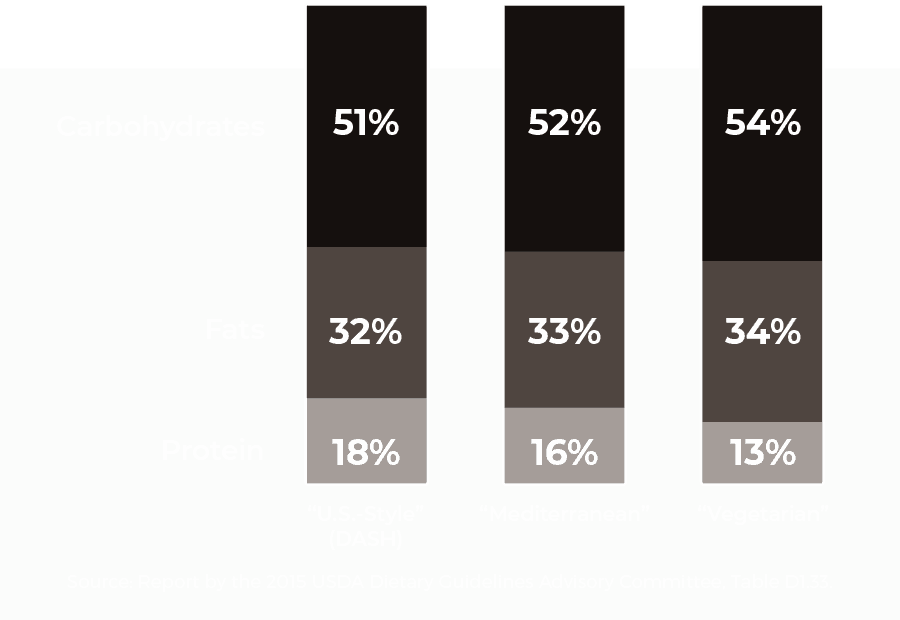 What is a low‑carb diet?

Low-carbohydrate diets are defined in the scientific literature as both percentages of macronutrients and total grams of carbohydrates. The USDA definition of 45% of calories as carbs is incorrect. The following definitions are largely accepted by leaders in the field, including now, the National Lipid Association:

What is the evidence for low‑carb?

A large, university-based clinical trial of 349 participants shows Type 2 diabetes can be reversed: This means pre-diabetes can also be reversed. The only other diet demonstrating the ability to reverse the course of diabetes is a formula-based, starvation-level diet, yet the outcomes are not as well sustained.

There have now been at least 52 clinical trials on “low-carb,” with the diet defined as 25% of calories as carbs or less.* These include:

*There are nearly 100 trials where low-carb is defined as up to 45% of calories as carbohydrates, but we do not consider this to be a true, low-carb diet.

Low-carb, including “very low-carb,” is considered a “standard of care” by the American Diabetes Association (ADA), in part because this diet lowers blood pressure, increases the “good” cholesterol, and controls blood sugars.[1]

Also, the ADA concluded that “Reducing overall carbohydrate intake for individuals with diabetes has demonstrated the most evidence for improving glycemia [blood sugar control].”[2]

All these positive health outcomes are also relevant for the 88% of Americans with metabolic diseases.

Is a low‑carb diet sustainable?

In an online survey exploring how voluntary adherents of a low-carbohydrate diet rate its effectiveness, more than half of the 1580 respondents reported that they had been on the diet for over a year. Of the respondents, more than 500 had been low-carb for over 2 years.

While many of the respondents started a low-carb diet for weight loss, they also reported other physical and psychological improvements. 51 percent reported having high energy levels (compared to only 4% before low-carb). Use of various medications reduced by more than half, and eight out of 10 respondents reported improved self-esteem and overall happiness.