Wall Street Journal Article: Should Americans Get Half Their Calories From Carbs? Two Camps Battle It Out

Blog: Wall Street Journal Article: Should Americans Get Half Their Calories From Carbs? Two Camps Battle It Out 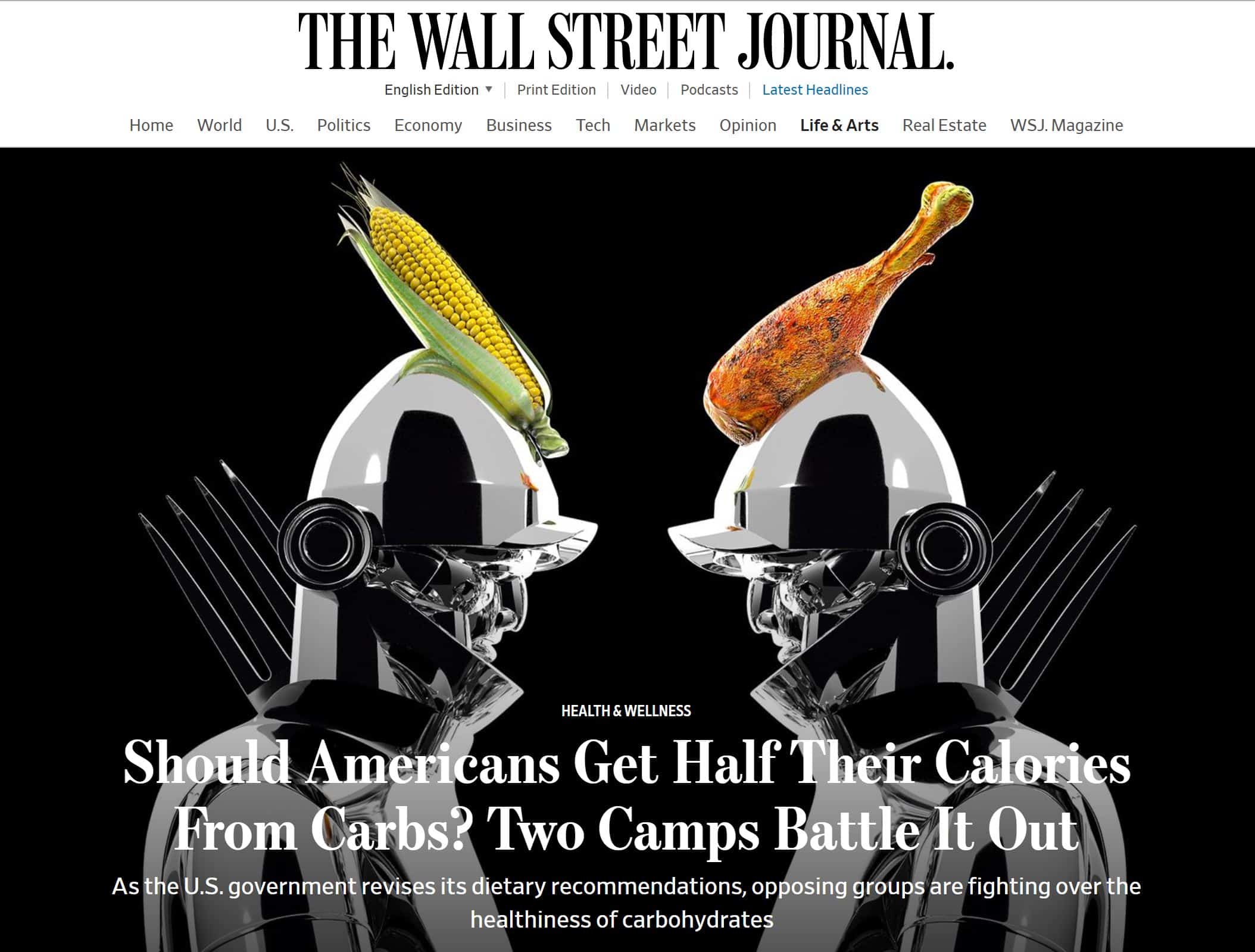 Link to story as originally printed in the Wall Street Journal

On Monday, the Wall Street Journal (WSJ) published an article by journalist Sumathi Reddy questioning if all Americans should get more than half of their daily calories from carbohydrates, as currently suggested by the Dietary Guidelines for Americans (DGA). Our answer has clearly been ‘no,’ especially for people with obesity, diabetes and other nutrition-related conditions. This view was fairly represented in the article. Opposing views were also presented, and we describe our response to these in this blog post.

The article quotes Dr. Mark Cucuzzella, L-CAN Director and professor and director of low-carb nutrition at the West Virginia University Center for Diabetes and Metabolic Health. “About half of the country has either diabetes or prediabetes, 40% are obese, and if you include overweight Americans it’s about 70%. The people that are well, they really don’t need the government’s advice,” he said.

The article notes that L-CAN has been on the frontline of the effort to promote the need for a low-carbohydrate option in the Guidelines and has submitted over 65 low-carb studies that the Dietary Guidelines Advisory Committee (DGAC) ignored in its scientific review of this diet. In fact, the DGAC, in its literature search of low-carb diets found only one study that met its inclusion criteria. The next set of Guidelines, for 2020-2025, are due to be released by the end of this year.

The WSJ also mentioned a report from the American Diabetes Association, finding sufficient evidence that a low-carb or very low-carb diet can lower blood sugar levels and lower medication usage. The article included studies by Ronald M. Krauss, professor of pediatrics and medicine at the University of California, San Francisco which show that low-carb diets can improve insulin resistance and cholesterol levels, which in turn reduce the risk of heart disease and type 2 diabetes.

Contrasting with these views are those quoted from Susan Levin, director of nutrition education for the Physicians Committee for Responsible Medicine (PCRM), who stated that Americans already consume too few “helpful carbohydrates.” PCRM is described as an advocacy group that supports plant-based diets yet it is first and foremost an animal rights group.

Jamy Ard, a member of the DGAC, said the biggest challenge his committee confronted was isolating the health impact of low-carb diets when they’re not being used for weight loss.

It’s important to note that weight loss is an integral part of disease reversal; indeed, weight loss is the most-recommended strategy for reversing type-2 diabetes. Also, given that more than 42% of American adults now have obesity, omitting studies on weight loss makes little sense. Yet even accepting Ard’s point, L-CAN identified and submitted to the USDA 65 low-carb studies for which the primary outcomes were not weight loss but instead other metabolic factors. These studies were also ignored by the expert committee.

In the article, Alice Lichtenstein, professor at Tufts University, is quoted saying there is little evidence that low-carb diets help reduce cardiovascular risk factors or help with weight loss, compared to other diets. Yet, in head-to-head diet comparisons of weight loss trials, low-carb diets are almost always found to be superior to the comparator, as confirmed in meta-analyses of clinical trials, the most rigorous type of science[1][2]. This is especially true when low-carbohydrate diets are properly defined as below 25-30% of calories.  Low-carbohydrate diets have also demonstrated in clinical trials significant benefits for the vast majority of cardiovascular risk factors, including reductions in blood pressure, triglycerides (fatty acids in the blood), and most inflammatory markers, while increasing HDL-cholesterol, the “good cholesterol.” Although increases in the so-called “bad” LDL-cholesterol are also sometimes seen with low-carb diets, this effect is often transient and does not effect the overall reductions in the long-term cardiovascular risk-factor scores that occur with patients on low-carb. [3][4][5][6] The comparators in these clinical trials are almost always the low-fat diet, which in most cases does not perform as well.

At the end of the article, a USDA spokesperson defends the Guidelines, saying the policy is “intended to be generalizable to the American population at large” and that it’s “beyond the scope of the dietary guidelines to be tailored to specific groups or treat specific diseases.”

L-CAN notes that Congress requires that the DGA to be for the “general public.” In 1980, when the Guidelines were launched, the public was indeed largely healthy, but that is no longer true today. Fully 60% of Americans have been diagnosed with one or more diet-related chronic disease. Because the Guidelines do not address those with metabolic conditions, L-CAN has launched a campaign asking the USDA to issue the next Dietary Guidelines with a label: “Only For Healthy Americans.” This would allow non-healthy Americans to understand that this policy is not appropriate for the treatment of their conditions. To lend your voice to this important effort, please click here.