Press Release: L-CAN Testifies on Need for Guidelines to Include Low-Carb Science to Address Majority of Americans 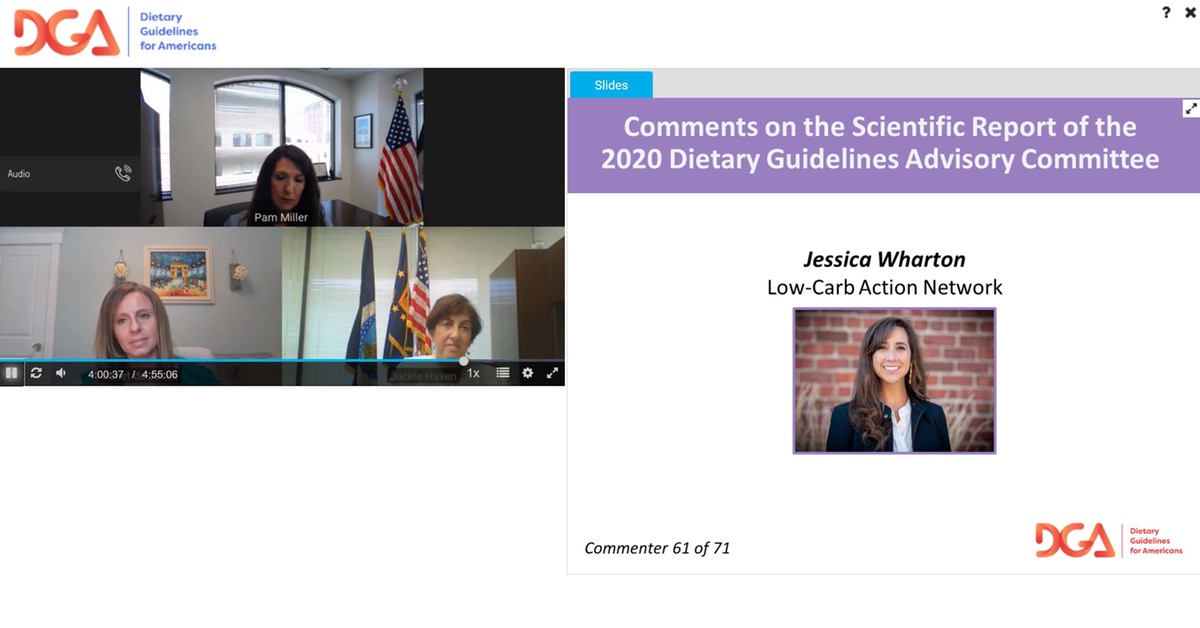 WASHINGTON, D.C. – The Low-Carb Action Network (L-CAN) yesterday provided oral comments to the Departments of Agriculture and Health and Human Services (USDA-HHS) on the importance of including low-carb science in the 2020-2025 Dietary Guidelines for Americans (DGA) to support the majority of Americans battling one or more diet-related health conditions.

The online web meeting allowed for public oral comments on the scientific report authored by the 2020 Dietary Guidelines Advisory Committee (DGAC). The DGAC report excludes virtually all low-carbohydrate studies and all trials on weight-loss. L-CAN has identified at least 65 clinical trials—the gold standard of scientific evidence—that the DGAC ignored.

“L-CAN has repeatedly asked the DGAC to broaden its criteria for its “Dietary Patterns” to provide a low-carb option,” said L-CAN spokesperson Jessica Wharton in her comments. “We have pointed out to the Committee that 42.4% of Americans are obese and 114 million Americans have pre-diabetes or diabetes. Combined, an estimated 60% of the U.S. population suffers from one or more diagnosed diet-related health conditions. If not addressed, these epidemics will only get worse.”

Benefits from a low-carb diet include helping people to achieve or maintain a healthy weight, which is one of the stated goals for the Dietary Guidelines. Low-carbohydrate diets have also been shown, in clinical trials, to reverse pre-diabetes and type 2 diabetes as well as improve the vast majority of cardiovascular risk factors.

Wharton continued, “If you decide to approve the Committee’s report as presented, we ask you to consider the consequences of letting federal nutrition guidance continue to ignore the ongoing and growing epidemics of obesity and diabetes. Five years ago, in 2015, then-HHS Secretary Sylvia Burwell Matthews admitted at a hearing before the House Agriculture Committee that “we are on the wrong trajectory” in addressing these health concerns. Now, in 2020, the problems are worse. How much worse will they be in 2025, when the next Guidelines are written?”

“The need to directly address the real needs of over 60% of the American people with diet-related conditions by providing meaningful nutritional guidance is the basic issue underlying the debate on the Guidelines,” concluded Wharton.

L-CAN continues to object to the process used to create the next iteration of the Guidelines and is calling for a delay in finalizing these Guidelines until scientific studies on low-carb diets are not only included for review but a low-carb diet can be incorporated as one viable option among the Dietary Patterns. The charter for the DGAC expires on October 5, which allows time for the committee to extend its work—and to consider the 65-plus studies on low-carbohydrate diets that the Committee has thus far chosen to ignore.

The Low-Carb Action Network is a coalition of doctors, academics, advocates, and Americans with personal success stories, urging U.S. nutrition leaders to include a true low-carb diet as part of the 2020 Dietary Guidelines for Americans.