Dietary Guidelines Touch Every Aspect of Nutrition in America

Blog: Dietary Guidelines Touch Every Aspect of Nutrition in America 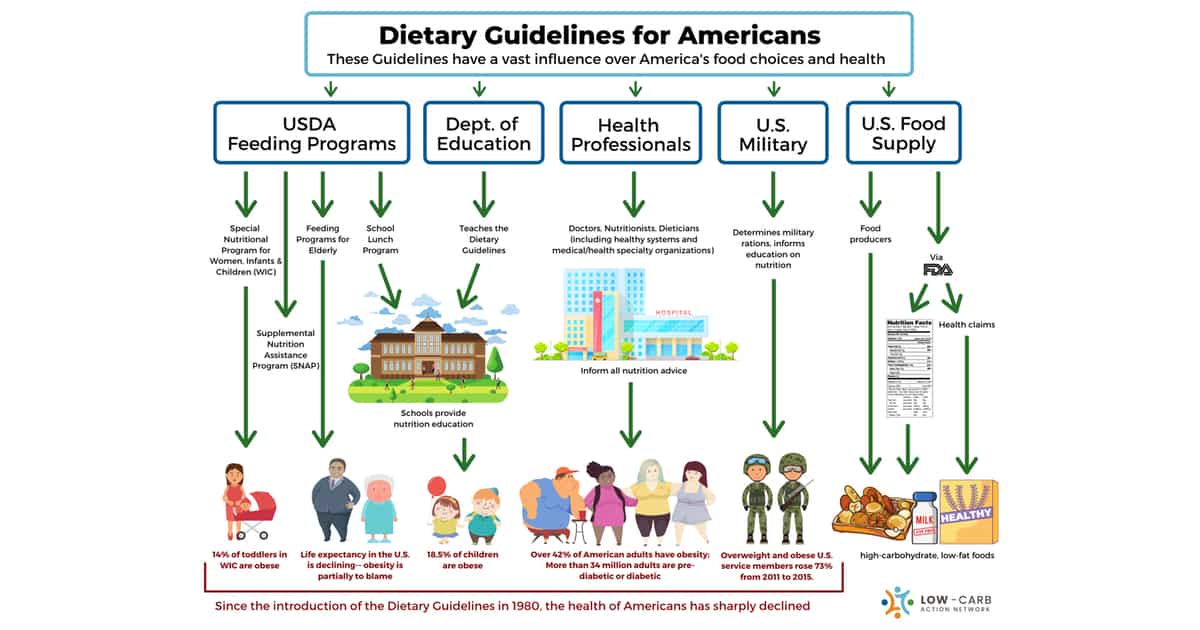 What do your grade-school child, your loved one recovering from surgery in a hospital, and neighbor’s son or daughter serving in the US military have in common? The answer: what they had for lunch. The meals for all these groups—and many more—are largely driven by food formularies from the U.S. Dietary Guidelines for Americans (DGA).

Though few people realize, the DGA are highly influential, quietly pervading the lives of everyone in America and thereby crucially shaping the nation’s health. From the advice doctors and dieticians give their patients, to the food served in hospitals, schools and military mess halls, and the FDA-approved Nutrition Facts Panel on food packaging, the DGA form the very foundation of American health—the food we eat.

That health is not good. Indeed, America’s health has been in decline since 1980, when the first version of the Guidelines was introduced. Forty years later, here is a breakdown of the current, shocking statistics from the Centers for Disease Control and Prevention (CDC):

The Dietary Guidelines Advisory Committee recently presented its expert conclusions, which continued to exclude not only studies on low-carbohydrate diets but also virtually all trials on weight loss.

Excluding trials designed to help people lose weight is particularly egregious given that 82  percent of the U.S. population has obesity, prediabetes or Type 2 diabetes. By failing to address the chronic dietary health problems facing the majority of the U.S. population, the Committee is doing a great disservice to the public. By omitting all the trials on low-carb diets, the Committee is also depriving Americans of a safe, effective and cost-efficient means of reversing diagnoses of type 2 diabetes, hypertension, and most cardiovascular risk factors.

We should all be outraged at the lack of sound science and transparency underpinning the creation the Dietary Guidelines. The Guidelines impact every aspect of nutrition and, by extension, the health and well-being of the American public. Join L-CAN in asking Congress to demand that the DGAC review all science, especially on low-carbohydrate diets, which provide safe and effective ways to combat nutrition-related illnesses.